Love Moves All the Furniture/Part 1 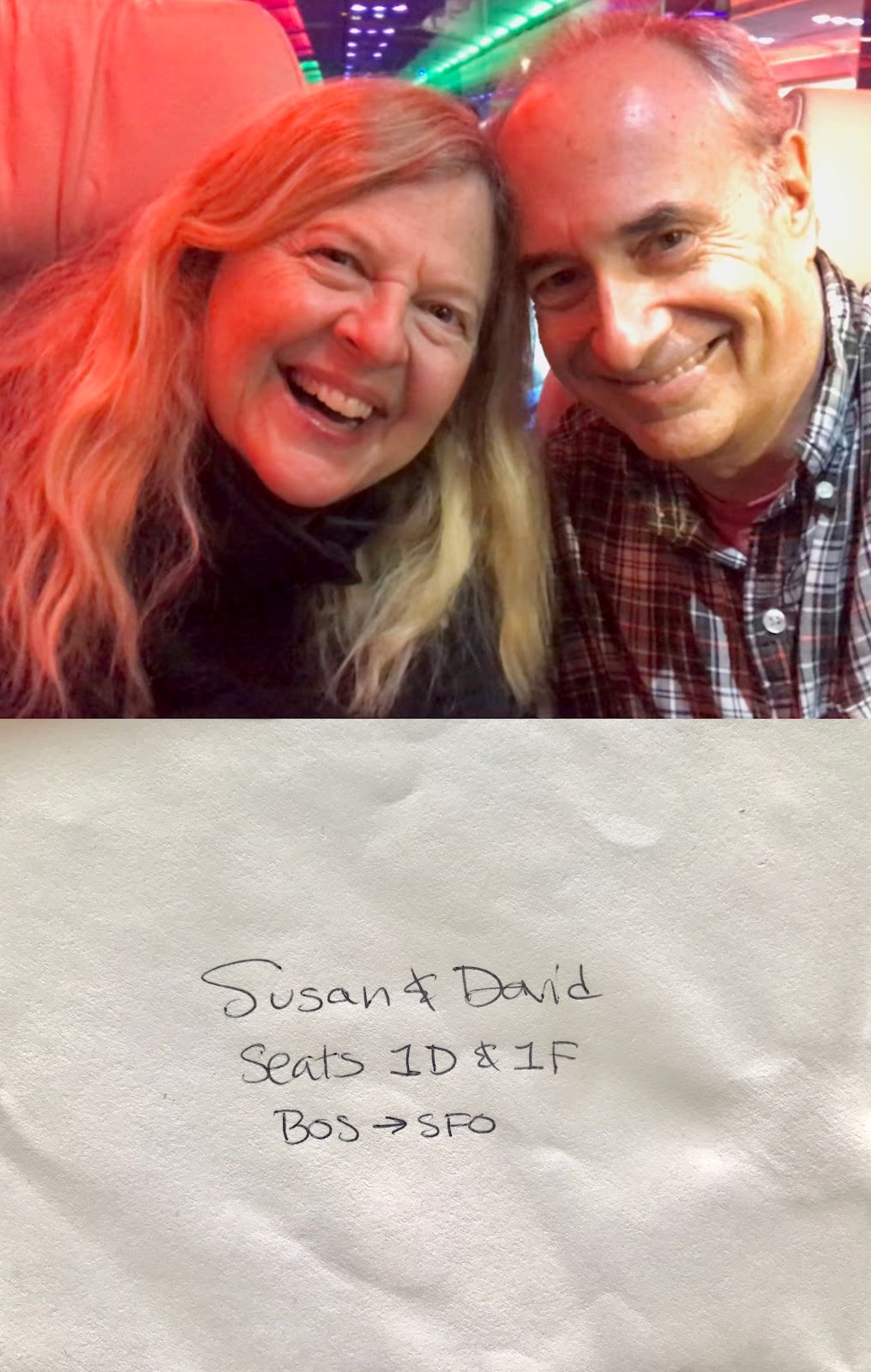 David and I have lived together now for just over a month in my home in San Francisco. The process of it becoming our home is fully underway.

Here we are flying out of Boston first class after David asked for that favor at the gate just minutes before boarding began – and surprised me with two first class tickets. My eyes were so blurry from exhaustion it took a moment to register what had actually happened.

We sat in the front row of the plane and began a conversation with 2 lovely women who had just gotten married and were flying to San Francisco for their honeymoon. We shared our love stories with each other and enjoyed many laughs throughout our flight. They spent most of the flight signing, addressing and stamping hundreds of holiday cards to send to all their friends and family.

During the flight they handed David an envelope. It was exciting to get our first Christmas card addressed to us as a couple – and from people we had just met, who simply wanted to share their love with us.

Of course, it hasn’t all been easy, and great adventures often start out with some turbulence. And you’ll notice that I’m just a tiny bit dramatic.

There ought to be an after photo of our disheveled faces 8 hours later after carrying what felt like 800 pounds of luggage up 4 flights of stairs when we arrived from the airport at 1am- and all after packing up his home that same day in Massachusetts.

When we first opened the door, I was sure that someone had shrunk my apartment by at least 50%. It seemed that this shrinking was predictive of our abilities to be happy cohabiting.

It did help tremendously that I have the Magic Cottage- a 200 square foot former tool shed downstairs, but it’s tiny and rustic and I didn’t know if David would like it enough to utilize it as a place for him to work, have alone time, and give me alone time too. I was so happy to discover that when I took him down to the cottage, his face lit up with pure joy, and he said,

“I LOVE this cottage!” (it IS magic after all) and I felt so gratefull.

My worried mind then wondered if he’d ever actually spend time there- it’s one thing to like it at first, it’s another to like it ongoingly. This felt to me like a giant metaphor about whether we’d actually be happy living together.

And of course every feeling in the world was coming up for me, all in the form of negative what IF’S. What if…………??????? These were not friendly thoughts. Bands of inner critics were also speaking, and all at the same time. It felt quite loud inside of my head. My self care practices work well- they just work after I’ve actually felt the feelings, which I was in the uncomfortable process of doing.

I worried that it felt like too big of a risk to try this, even though David had reassured me that he’d leave if it didn’t work.

My living with a lover history was slim- before my fiancé John moved in in 2012, I’d not ever lived long term with any of my many lovers. Living with John for almost 4 years became such a joy that we wrote a book about it!

Could history repeat itself? Or was John the exception to my astounding number of interior “rules?” And of course, John died in 2016, so I had that history to contend with as well.

Like many artists, I’m pretty fiercely independent and love my solitude. I’m also highly sensitive and mostly an introvert. Additionally, I work at home, writing, creating and mentoring.

Had I just ruined my life?

I barely slept that first night, and woke up to write down 83 fears that had fully arisen- fears that now could barely fit in into our living space!

As David wrote in his journal that day:

“At first we had our own worlds and energy systems and it felt like we were trying to squeeze them into a finite space. And then we relaxed and all the walls went away – and (suddenly) we were just a boy and a girl who want to play.”

Being able to share ALL of my feelings with myself and then him, expanded the size of the apartment by at least 200%, and we began visioning how the space could better accommodate us both.

It seemed clear that it would involve moving a lot of furniture- both literally and figuratively.

David is as eccentric as I am, and we both enjoy having our own bedroom. The apartment has 2 bedrooms- one of which has been my art studio for 20 years. I had resolved before to move out of that room, and now that a move was imminent, promptly felt horrified and filled with irrational love for every smidgen of what was in the studio.

My original plan was to take things out of my bedroom to somehow fit my studio in there- now I didn’t see how it could possibly work.

Also, David brought up an idea of helping me go through all my bins of art and journals that have been sitting in my garage for decades. His intuition was that there was more SARK material there that the world could benefit from. But now when he brought it up again, the thought of having even MORE things to deal with registered somewhere between frustrating and completely overwhelming and infuriating.

Plus of course, where would all of that stuff go?? How could we both happily live and create and tune in to our own inspiration in this somewhat confined, though beautifull space?

I’ll write about what happened in my next blog in Part 2!

The EASY way to magically bring you back to creative focus, over and over again!

More from my site

responses so far (what you share will be loved and appreciated)

Want the EASY way to magically bring you back to creative focus, over and over again?