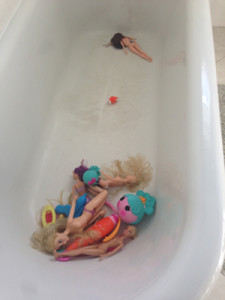 When things feel difficult, it is tempting to contract or collapse in the midst of them.

When we feel hurt or diminished, it can feel natural to curl inward and just hide there.

And sometimes hiding for awhile feels good, and seems necessary.

In addition to many powerfull shifts and positive changes in my personal and professional life, I’ve also been experiencing some professional setbacks in certain areas- some unexpected changes and what have appeared to be reversals.

We are doing some bold new things in new ways, and we’re creating a new path as we go.

Yet my wise self inside urges me onward to my pen and paper, and I began creating a mighty new vision for what I truly wanted.

It appeared that many things were collapsing around me as I created this new vision.

I became aware that I was choosing to spend my time and energy in creating, more than I was investing my energies in collapsing.

As each piece of “bad news” arrived, I turned towards the new creations- almost as though I hadn’t heard the other news.

And in a way, I hadn’t. At least I hadn’t heard it through the lens of fear, which always skews the results to “the worst.”

I knew if I immersed myself in collapsing, I would be under an interior pile that would take a long time to climb out from under.

I also knew that if I saturated myself in creating, I would certainly be able to uplift myself, and consequently, others.

Creating this attitude and perspective takes practice and application- neither of which can be experienced by only collapsing.

But my choice to see the benefits in collapsing is what allowed me to turn to the creating. And it wasn’t aversion to collapsing that led me out- it was my dedicated focus to the process of creating, of birthing, of reNEWing my spirit, while also simultaneously allowing the collapsing. This allowing of my collapsing leads me straight to creating- when I chose it.

In choosing it, I have something new to share with you very soon. An inspiring sort of creative pathway to help guide you through collapsing and creating. I know it is needed, because collapsing never goes away.

I still collapse, I just don’t spend as much time there.
I go down, I get back up.

Again and again, my Inner Wise Self expands my soul, my very being through this daily connection and communion with this giant unconditionally loving part of myself.

Whatever I thought was lost, broken or denied to me, was only reshaping itself, and this is further supported by my creating.

And both creating and collapsing serve us.

We soar and crawl, we fly and stumble, we zoom and inch, we blaze and block, we expand and contract, we allow and deny, we collapse and recover, we create and quit, we dance with both as we travel as human beans in this fruit filled symphonic full hearted palace of every soul’s awakening.

I send you creating AND collapsing, and the ability to go easily between the two, and spend less time in the collapse.

Dear Moonbeam, You might know that I wrote a whole book about napping called Change Your Life Without Getting Out Of Bed. I created this book because I was so often feeling crabby and...

Dear Curious Creative,   I love finding great things that inspire me and others. I love doing research.   I find great places to rent, free things, ways to collaborate with others, resources,...

How to bounce back when you manifest something UNmagical

As you may know, we've been sending out emails recently about our Magical Manifestation Method course that we've co-created with the fabulous Amy Ahlers- The Wake-Up Call Coach-that's starting soon,...